Nicholas Eckerman and Lee Maen: rolling with the tides of changing tastes 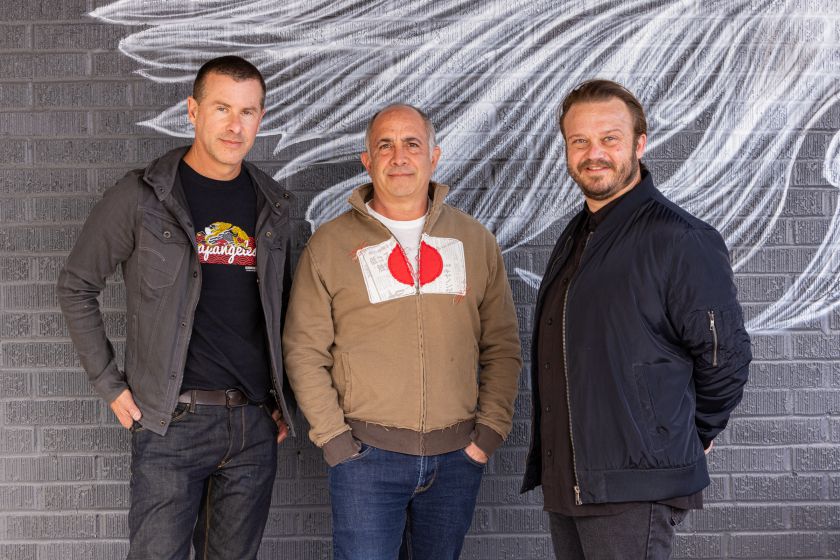 Los Angeles, a city noteworthy for innovative restaurants and the people who love them, spent much of 2020 enduring a culinary mælstrom in the face of the pandemic. While many local institutions at every price point shut their doors, others found a way to not only stay afloat but come out the other side stronger thanks to their pivoting to delivery, takeaway, food trucks and outdoor dining.
On the other hand, Los Angeles’ restaurant scene has always been on the turbulent side enduring rigours ranging from the increasingly sophisticated and worldly American palate to dietary concerns, recessions and the loss of some of its greatest home-grown culinary champions (including legendary food critic Jonathan Gold) whose reach extended far beyond the city. Although restaurateurs Nicholas Eckerman and Lee Maen came from different sides of this complex and fascinating universe, both had a front-row seat to nearly 20 years of seismic changes that have shaken up the way millions of people eat around the US and the world.
Eckerman got a hands-on education in the restaurant industry as the co-founder, president and CEO of PizzaRev, not only inventing something fresh in the then-new space of fast-casual, but also doing it alongside father Rodney Eckerman and Irv Zuckerman, former veteran rock promoters who knew a few things about drawing crowds. PizzaRev, which launched in 2012, upgraded the pizza parlour–to-go experience by making it interactive—customers could pick and choose fresh ingredients and see their creation come together in seven minutes. By then, he applied his bachelor’s degree in economics and arts from the University of Texas at Austin and University of Hawai‘i at Mānoa, and early gigs as a food and beverage manager with Ritz–Carlton and the Malibu Beach Inn Hotel and Spa’s director of food, beverage and operations.
With Los Angeles cited as an epicentre for America’s sushi boom in the ’80s, Lee Maen was part of a power trio that brought its cool and contemporary Hollywood spin to time-honoured Japanese culinary traditions around the world. While their Innovative Dining Group (IDG) may not be a household name, its high-end, award-winning and trend-setting Sushi Roku, Katana and BOA Steakhouse restaurants are synonymous with what’s right in LA dining. The venues have proliferated worldwide without sacrificing quality or craftsmanship, allowing them to be as relevant now as they were when they opened over two decades ago.
Their combined experience has converged with the opening of Yakumi, which brings together something Japanese food lovers never thought possible: the artistry and flavour profiles of fine sushi and affordable prices…and not cheap sushi. The dining environment, meanwhile, exceeds fast-casual expectations with the care put into the décor. ‘We designed an unusually beautiful atmosphere for a fast-casual restaurant,’ affirms Maen, whose Los Angeles Japanese food venues earned critical mass across the country. ‘We hired LIVIT, a well-known design firm out of Spain and Sweden, and made it feel like the kind of Japanese shop you would come across perusing some of Tokyo’s trendier neighbourhoods.’
‘Over time the public’s knowledge and demand for high-quality sushi has grown tremendously and usually, high-quality sushi is very expensive,’ explains Lee Maen. ‘At Yakumi, we are able to offer high-quality sushi at a reasonable price through our labor efficiencies and our purchasing power as one of the biggest buyers of sushi grade fish in southern California. [This taps into the success of] Innovative Dining Group, with our 20 years of perfecting certain sushi menu items, and with that we have a lot of data on what are the hits and the most popular. We really began our Yakumi menu with that laser focus.’
After PizzaRev was sold to another company, Maen and Eckerman joined forces to pull together a new Japanese dining concept that could unite elements of stylish décor, ultra-premium sushi and care-free convenience. Burbank’s media district (home to major studios including Warner Brothers) was the launch pad and its occupants the model customers. But the countdown stopped mid-planning when the world shut down in March 2020. However, the fallout and the changes that followed made the resulting collaboration a genuinely innovative move into the future of dining, solidified through a successful affordability–quality–luxury equation.
‘I am really drawn towards foods and items I cannot make at my house, and I believe this leads to embracing many food cultures, and I think people in our age group, younger people and Gen-Xers are all on the same wavelength,’ says Eckerman. ‘When developing Yakumi, the entire focus was on the equation of the highest quality sushi in the most accessible, simplest form. Having a product that was as good in the restaurant as it was to-go or for delivery. The learning and the evolution from a fast-casual format like PizzaRev to a blend of fine dining and fast-casual was that restaurant customers are continually looking for more limited selection of items, but a higher level of quality. We want to be really, really, really good at a limited number of things, rather than “just OK” at a lot of things.’ 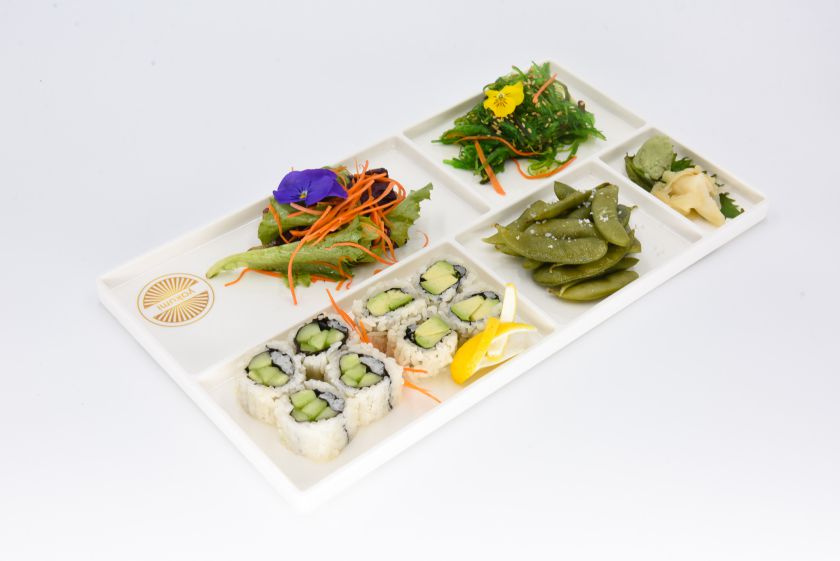 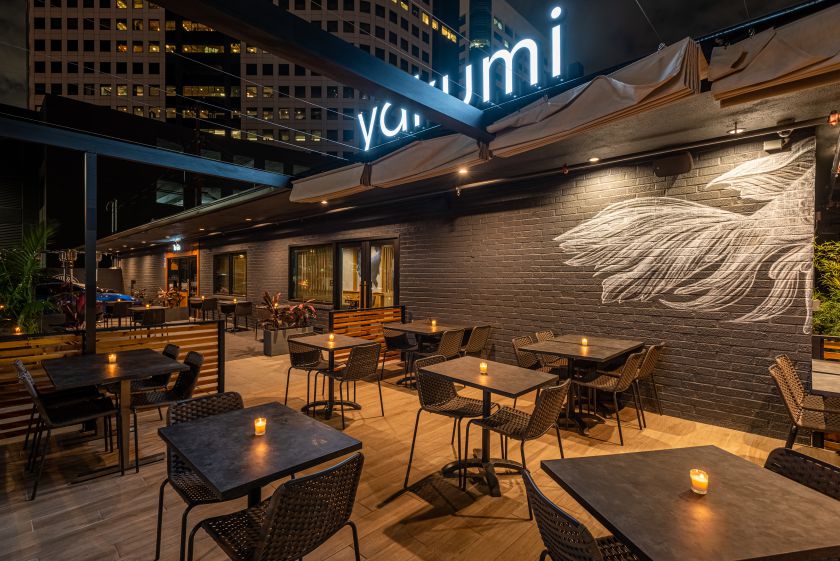 What were the most important lessons on being entrepreneurial that you took away from working with your father, Rodney?
Eckerman: My father really taught me the importance of rolling with the punches as an entrepreneur. Not everything is going to go exactly as planned, that’s for sure. He understands how to look at every fork in the road like the next challenge.

As we go into the post-pandemic era, what advice would you offer somebody looking into a restaurant, especially with the risks that have been historically involved in making it profitable without compromising quality?
Eckerman: I would offer the advice to recognize that people are dining in new ways. The traditional way of doing things in the restaurant business has forever evolved. We permanently have to have a focus now on the outdoor dining experience, i.e. patios, and a focus on to-go and delivery product and all the tech surrounding these functions.
Maen: I would definitely have future pandemic-type language in your lease, because honestly, this could happen again—we now know what’s possible. We’ve also seen that outdoors is king when there’s an issue, so having an outdoor patio or potential area to expand outdoors is a huge plus. Being on the cutting edge of sanitization and being clean and safe will make you stand out in the future.

With ramen being all the rage right now, especially with younger customers, why is now the right time to originate an affordable sushi izakaya-style fast-casual place?
Maen: I think fast-casual fits in with a lot of the younger generation’s mode of life, being able to create their own moments and make it what they want. Meaning you can come here and be in and out quick, take it to-go or for delivery, but also dine in and hang out for a first date, a celebration with friends or just eat on your own with your laptop and get out of there. We think it’s right on with the times.
Eckerman: That said, we absolutely love ramen, and have our favourites, of course. While we are thrilled ramen is all the rage, especially as ramen and sushi are both Japanese in origin, they are such different dining experiences. We wanted to offer something as craveable and unique for sushi as many ramen restaurants are.

What is it about Japanese food, and sushi in particular, which has allowed it to stand the test of time? How is Yakumi emblematic of this?
Maen: People find Japanese culture trendy and exciting, very forward-thinking. Furthermore, you feel special when you’re eating sushi because it’s something you know has been crafted by very talented chefs. Even with the price and convenience, when you come to a place like ours, you know it’s going to be a very high-quality product, especially as we have solid credibility through Katana and Sushi Roku. Regardless of the restaurant’s format, when a high-quality product is paired with the craftsmanship, you have something beautiful that people love.
Eckerman: I think at its core, sushi is so popular because it’s such a unique dining experience compared to nearly all others, especially western-style cooking. Yakumi wanted to embrace that unique aspect and experience, and present what we believe to be some of the best sushi combinations anybody could imagine.

What were some of the biggest challenges in creating a small menu that allowed you to bring premium sushi to customers at a more affordable price? What was the “whittling down” process like when finalizing the menu?
Maen: We love to offer an exotic variety at our other restaurants, but when it comes down to it, people have their favourites and most common selections. Therefore, from tons of data we’ve gathered over 20 years, we were able to determine what people eat most often and put together a combination based on the most popular items. Another challenge was being efficient with labour and purchasing so we can get the price down to an affordable value.

What did you do to elevate Yakumi to feel closer to a higher-end dining experience above and beyond the quality of the food?
Eckerman: Beyond opening up a beautiful and elevated restaurant atmosphere, we put an incredible amount of thought into the to-go packaging and boxes that our sushi combos come in to make them beautiful and as enjoyable as the sushi itself. 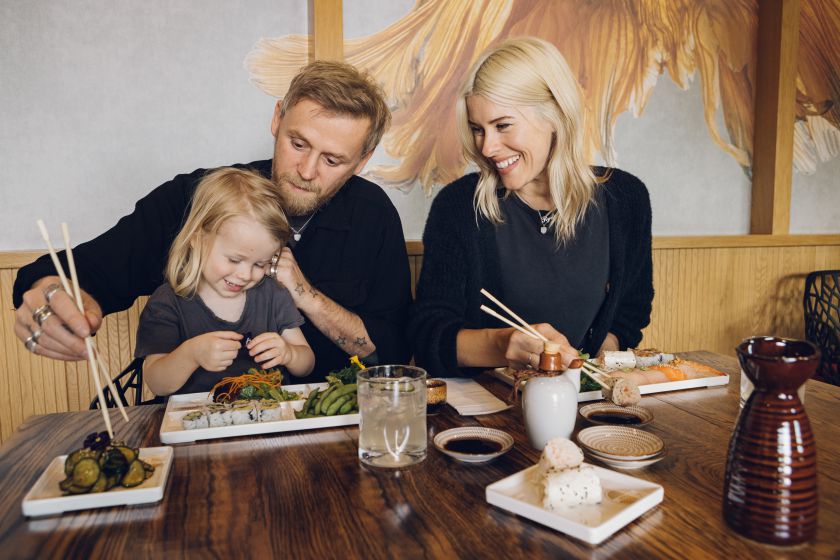 Pillow Pops: Shani Moran presents a softer side of bold

The Fold London spring–summer 2021 collection: a cut above for the fashion-forward career woman 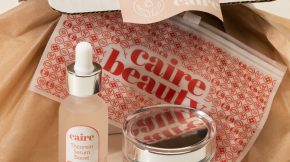